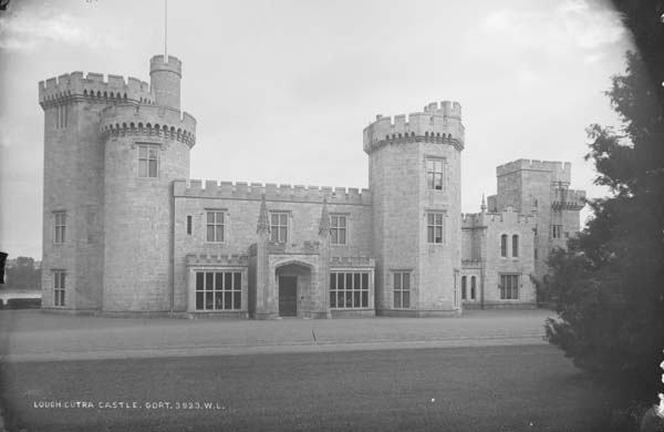 Beagh is the most southerly parish of County Galway. It is bound to the West, south and south east by the County of Clare. The name Beagh or Beithe in Irish, means birchwood. Although the official name of the parish is Beagh, the village name of Shanaglish is more commonly used. Shanaglish, or 'Sean Eaglais' translates as 'Old Church' is the ecclesiastical centre of the parish - the parish church and 3 graveyards are located in this townland.


The parish of Beagh once formed part of the ancient territory of Hy Fiachrach Aidhne which produced 14 of the Kings of Connaught. Descended from Fiachrach are the O'Shaugnessys whose legacy can be seen in the two well preserved castles of Ardamullivan and Fiddaun and whose territory was known as Cineal Aodh. The name Cineal Aodh is derived from Aodh, grandson of Guaire, the 7th century king of Connaught who was also ancestor of the O'Shaugnessy clan.

​Parish: Beagh
BEAGH or ST. ANNE'S, a parish, in the barony of KILTARTAN, county of GALWAY, and province of CONNAUGHT, containing, with part of the post-town of Gort, 5343 inhabitants.

This parish is situated on the confines of the county of Clare, and on the road from Galway and Loughrea to Ennis. A monastery of the third order of Franciscans was founded here about the year 1441, but by whom is unknown: in an inquisition of the 28th of Elizabeth it is denominated a cell or chapel, and its possessions appear to have consisted of half a quarter of land, with its appurtenances and tithes, which had been long under concealment. The parish comprises 12,331 statute acres, as applotted under the tithe act, and there is some bog; agriculture is improved, and there is good limestone.

Large fairs for cattle, sheep, and pigs are held at the village of Tobberindony, on July 12th, and Sept. 20th.

It is a vicarage, in the diocese of Kilmacduagh, united with part of the rectory, and forming part of the union of Ardrahan; the remaining portion of the rectory is appropriate to the see. The tithes amount to £218. 1 shilling and 6 pence, of which £38. 15 shillings 4 and a half pence is payable to the Ecclesiastical Commissioners, and £179. 6 shillings 1 and a half pence to the incumbent.

The Roman Catholic parish is co-extensive with that of the Established Church: the chapel is a plain building, but a new one is about to be erected on a site given by D. M'Nevin, Esq.

There are six hedge schools in the parish, in which are about 340 children.

Here are the remains of the ancient castles of Fidane and Arddameilivan ; those of the former are in good preservation and very massive. At a place called the Punch-bowl the Gurtnamackin river first disappears underground.

Villages
Rec. Name: Sean Eaglais-old church
Orthography: Shananglish Village
Authority: Laurence Howarty, Ardamullivan
Situations: In the west of the townland of Ardnamulluvan, parish of Beagh, Barony of Kiltartan and Co. Galway
Des. Remarks: This village is on an old road leading from Ennis to Gort. It contains from 15-20 houses, a graveyard and the old and now Roman Catholic Chapels of Shanaglish. No fairs or markets held here. The new chapel can accommodate 600 persons. It is 4 miles southwest of Gort.

"THE PARISH OF BEAGH"
The parish of Beagh comprises the south-eastern districts of the diocese. It therefore comprises the old Belgic settlement of the Clan O'More, at and around Lough Cutra, and the splendid castles of Fiddane and Ardameelavane, which still speak of the departed power of the chiefs of Kinel Aedh. It also includes  some mansions of the last century, which are now fast sinking into decay. They were occupied by the Butlers, the Fosters, the Clovans - who sprang up under the  old chiefs about two hundred years ago, and who, like the chiefs, have  disappeared from the districts.

The Butlers had mansions at Bunahow and Ballygegan, and seem to have been  descended from junior branches of the Ormond family. Theobald Butler married Helena, daughter of Sir Roger O'Shaughnessy. This witty lawyer was better known as Sir Toby Butler, and was one of the most prominent men at the Irish bar in  the time of James II. The following brief extract may be transcribed here as illustrative of his character:-
"Sir Toby Butler, the Solicitor-General of our second King James, who 'lost  Ireland,'...was a clever lawyer-ready, witty, faithful, eminent. He drew up the Articles of Limerick, a document of wonderful ability, but soon after to be torn in shreds by those who pretended they would abide by its terms....Pleading one day before a certain judge of very bad character, in the county town of 'rare Clonmel,' the learned judge in a half jocose way remarked that Sir Toby's ruffles appeared rather soiled.
"' Oh yes, my Lord,' said Sir Toby, in the blandest manner possible; 'but,' showing his hands, 'you perceive, my lord, that my hands are clean.' The judge reddened and would have roasted Sir Toby amidst the laughter which the retort courteous elicited in a rather crowded court. Sir Toby was true to his king and true to his party." 1
​
It was probably by intermarriage with the O'Shaughnessys that the Cregg  property was acquired. After the confiscation of the O'Shaughnessy property, he purchased the O'Shaughnessy forests for £2500, which were, it is said, valued at £12,000. The splendid woods were quickly destroyed, and the grad old trees sold at sixpence each.

The Fosters, whose principal residence was at Ashfield, claim an English descent. We learn from deeds preserved in the Record Office, Dublin, that they obtained the Ashfield property by royal grant from Charles II; and Ashfield continued to be the family residence from the period of the Restoration to our own time. They were Catholics, and patrons of the humble "mass-house," which, during the entire of the last century, stood within the cemetery which adjoins the present parish church. A mall portion of this old chapel remains to the present day. The Foster estates in Beagh have passed from their hands within the present generation. The family is now represented by Mr. O'Donnellan Blake Foster of Ballykeale, Kilfenora.

A solicitor named Mac Nevin was their agent before the famine years. He too resided in Beagh, in a pretty villa called "Rosepark," and acquired property. His son became eminent as a writer and speaker amongst the gifted young men who in '48 opposed O'Connell. His History of the Volunteers was well received. Sir Charles Gavan Duffy gives the following graphic sketch of young Thomas MacNevin: 2
"He had distinguished himself, as we have seen, in the College Historical Society, as a competitor with Butt, O'Hea and Torrens Mac Cullagh, for its honours and applause, and preceded Davis and Dillon in its chief executive office. He was below the middle size, but well made, well poised, and agile, with auburn hair and clear blue eyes, which he believed he inherited from Danish ancestors. His face was mobile, and possessed the power, not given to one man in ten thousand, of expressing a wide range of feeling without exaggeration or grimace. He was a born orator of the florid and emphatic school, and he had studied elocution as an art under Vandenhoff and Sheridan Knowles. Joyous, exuberant, and fond of display, but of upright and fearless character, it is the supplement of this nature to say that in foresight and judgment he was not strong. He was indeed rash and impetuous, but as amenable as a child to friendly
counsel. By age, for he was a little over thirty and by culture he was associated with the young men; but by personal relations and family ties, with O'Connell."

And Davis 3 thought Mac Nevin "a man of real genius, with great capacity for public affairs, but as one who wants a great deal of discipline. A couple of years' training in the House of Commons, where he would probably at first encounter many disappointments, would lop off some of his exuberances and chasten his action, which is too theatrical. In the meantime, if he gives himself up to hard, solid work, such as his analysis of Kane, we will make of him a statesman of whom Ireland will hereafter be proud."

Alas! poor brilliant, interesting, and clever Mac Nevin! Such were the high hopes entertained by his friends of the author of the Volunteers,- hopes which were not realised. He was "not strong in foresight" of the practical kind. His friends' anticipations were never realised in his regard. Their possessions have passed from their hands, and the pretty villa of Rosepark knows them no more.
The Rev. Thomas Talmon was parish priest of Beagh in 1798. The next of his successors whose name we can record is Father M. O'Shaughnessy, a man of exceptional abilities. The population of the parish in his time was over a thousand families, though the number in 1871 stood at 543 families. The need of erecting a suitable church was therefore urgent. It was about 1840 that Father O'Shaughnessy undertook the erection of the present church. It is in outline a cruciform building without a chancel. It is nicely situated on an wooded eminence immediately adjoining the site of the old church. The site was granted by the Foster family. The work was completed within a comparatively short period, a fact which showed at once the zeal of the clergymen and the interest of the people in the completion of the work. Improvements have been effected in the church since, especially by the present respected pastor, which shall be noted further on. The improvements, however, have effected no change in the outline of the church.
Father O'Shaughnessy, who was transferred to Kilbecanty, was succeeded in Beagh by the Rev. M. Tully. He was a native of Ardrahan, a student in of the Irish College, Paris, and held pastoral charge till his death on the 1st of October 1859. He is buried in the little cemetery adjoining the church.
The Rev. John Barry succeeded Father Tully, and retained pastoral charge till his death on the 14th of April 1870. His gave adjoins that of his predecessor. On the death of Father Barry, the present respected parish priest, the Very Rev. M. Connolly, was transferred from Clarinbridge to take charge of Beagh parish, and was, as we have seen, on the occasion also appointed Vicar Forrane of the diocese. His church has been recently much improved by the erection of an altar in Sicilian marble. It is the gift of Mrs. Tierny, Gort, and is erected in memory of her amiable daughter, lately deceased.
​
Some readers may perhaps notice with surprise the omission of all reference to the ruined church which stands in the village of Beagh, on he river's banks at Lady's Grove. it is regarded by many, though we think incorrectly, as the Franciscan monastery of Beagh, of which Archdall speaks in his Monasitcan. It should be remembered that Archdall describes the Beagh monastery as amongst those of Clare county.  And we know that in the present parish of New Quay there is a Beagh townland in which there are some ancient ecclesiastical remains, which it may be more justly assumed are the ruins of the monastery of which Archdall speaks.

On the island of Lough Cutra lake there are also some interesting ruins- a church and castle amongst others, on the history of which no light has yet been cast. We find, from an "Inquisition" taken before John Crofton, Esq., at Athenry, on the 1st of October 1584, that Richard, second Earl of Clanricarde, was then seized of "Beagh and 4 qrts of land, and the ruined castle of Lough Cutra, with an island in the Loug aforesaid." It may be desirable to add that the Beagh referred to is the old ruined church on the Gort river, about two miles east of town, which had been long previously the parish church of Beagh. There can be little doubt that the lands referred to were its confiscated property.
____________________
1. Clare Journal, 1872
2 Young Ireland, vol. i, p. 74
3. Young Ireland, vol. i, p 177.