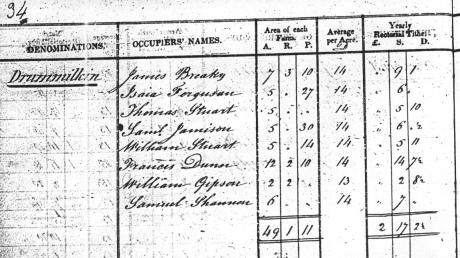 The Tithe Applotment books provide a record of the titheable land in each parish and were compiled in accordance with the Irish Tithe Composition Acts passed between 1823 & 1838. The purpose was to make an assessment of land values for the payment of tithes which was a tax levied on land, for the support of the Church of Ireland.

The tithe was calculated on the average price of oats and wheat between 1816 and 1823, while the quality ie productivity of the land was graded between 1 and 4, very good and very poor respectively , the tithe being levied on the quality of the land.

Not surprisingly, tithes were fiercely resented by those who were not members of the Church of Ireland, and all the more because the tax was not payable on all land; the exemptions produced spectacular inequalities. In Munster, for instance, tithes were payable on potato patches, but not on grassland, with the result that the poorest had to pay most. The exemptions also mean that the Tithe Books are not comprehensive. Apart from the fact that they omit entirely anyone not in occupation of land, certain categories of land, varying from area to area, are simply passed over in silence. Valuable precisely because the heaviest burden of tithes fell on the poorest, for whom few other records survive.

From a genealogical point of view, the information recorded in the Tithe Books is quite basic, consisting typically of townland name, landholder's name, area of land, and tithes payable. In addition, many Books also record the landlord's name and an assessment of the economic productivity of the land.

The usefulness of the Tithe Books can vary enormously, depending on the nature of the research. They can provide valuable circumstantial evidence, especially where a holding passed from father to son in the period between the Tithe survey and Griffith's Valuation.

Those labourers who worked on agricultural land owned by the Church were exempt. Even so, the books represent the earliest records for the poor of Ireland. The books are on microfilm at the National Archives and National Library in Dublin, and through LDS Family History Centers.

What the books contain
Tithe Applotment Books are arranged by parish and contain the following information:
·  Land occupier's name
·  Townland
·  Area of landholding in acres
·  Land assessment grade 1-4
·  Calculation of tithe amount
·         A summary of the townland and parish totals and
·         A list of landowners names

As a Genealogical Source
Although an excellent genealogical source, it was only concerned with tithe payers, thus excluding other classes such as cottiers, landless people and those living in urban settlements. It is important to remember that only persons occupying upwards of 5 acres of land were liable for tithes (cottiers or labourers usually rented less than 5 acres). It cannot be considered a comprehensive record.
Beagh Tithe Applotment Book 1834
Research Notes:  The Beagh Civil Parish Tithe Applotments were transcribed from the LDS Family History Film #256574 by Pat Connors.  All recorded names are as spelled in the record.  All entries should be checked if you are trying to find connections to your family. This resource is an index, since there is more information for each entry in the source document. The Townlands and/or areas used old times spellings, so may not look familiar. This record was not in good condition and was  very difficult to read, so if you should check the film yourself to be sure.  Besides the handwriting being difficult to read, the lightness of the writing in parts made some of the entries very difficult to read, so you will find a number of ??.

​Alternatively, you can examine the original Books here